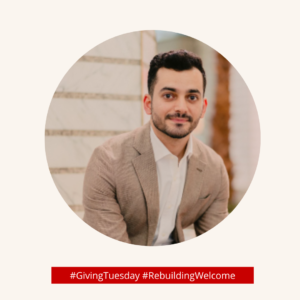 Sixteen years ago, I was standing in a long line on a hot summer day waiting to file for refugee resettlement at a UN center in Damascus, Syria after fleeing the sectarian civil war in Iraq. Earlier this year, I presented a new research report on reimagining what the welcome and integration of forcibly displaced persons (FDPs) could look like in the US  at the Annual Tripartite Consultation on Resettlement (ATCR) in Geneva, Switzerland.

My work with RCUSA has me reflecting on not only my lived experience in forced displacement, but also the 100 million persons that are currently facing forced displacement worldwide. Participating in the 2022 ATCR and being part of RCUSA’s policy and advocacy efforts assures me that if we want to strengthen our immigration policies, we must uplift and empower the voices of FDPs. Simply put, I believe that no one else can better understand the challenges of forced displacement and how to alleviate them than those who have been forcibly displaced.

We find ourselves at a troubling crossroads when the world is facing the largest displacement crises in history while the number of resettled refugees worldwide is just emerging from  a record low. As we slowly emerge from the COVID-19 pandemic, there’s an urgent need to come together to help address these displacement crises and create lasting impact on the lives of those in need.

In February 2022, Russia invaded neighboring Ukraine, creating the biggest security threat in Europe since the Cold War. As of today, the war on Ukraine has led to the forced displacement of more than one-third  of the population into forced displacement, including 7.6 million cross-border refugees, and 6.9 million internally displaced

Since the US evacuation in August 2021 and the rapid overtake by the Taliban, more than 24 million Afghans are in need of immediate humanitarian assistance, including 2.6 million registered refugees and 3.5 million internally displaced. Furthermore, the country continues to be crippled by near universal poverty, lack of health clinics, gender-based violence, and other human rights abuses.

After more than a decade of conflict, Syria remains to be one of the worst and largest humanitarian crises worldwide. With more than 14.6 million people in need, 6.9 million internally displaced persons, and more than 6.6 million refugees worldwide, topped by alarming poverty levels and rippling economic effects of the COVID-19 pandemic, the humanitarian conditions in Syria are worse now than ever before.

Years of conflict, a devastated economy, crippled health services, and fractured food supplies have left more than 80% of the population dependent on humanitarian aid, making Yemen a significant humanitarian crisis and site  of displacement. Today, there are more than 20 million Yemminis in dire need of immediate humanitarian assistance as well as 4 million internally displaced people.

Hunger, deteriorating living conditions, economic instability, and conflict have forced more than 6 million people to flee Venezuela, making it one of the world’s most significant displacement crises. Women and girls are especially at risk due to gender-based violence. Additionally, malnutrition and lack of access to basic health services remains prevalent for all, and particularly for children. Though Venezuelan FDPs are facing significant harm and hardship, the Biden administration elected to expand Title 42 – an anti-immigrant border policy – to Venezuelans in October 2022, while admitting a relatively small number of Venezuelans into the US via humanitarian parole.

For nearly a decade now, South Sudan has been dealing with a brutal conflict that has claimed the lives of thousands of innocent citizens and forced millions to flee their homes. Additionally, famine is on the rise in South Sudan with nearly 60% of the population now facing the alarming  levels of food insecurity.

The Democratic Republic of Congo

Today, there are over 27 million Congolese who are dealing with emergency-levels of food insecurity. Additionally, waves of instability, and health crises – including Ebola, Cholera, and COVID-19 – have forced more than 5 million Congolese to be internally displaced.

Severe climate conditions, coupled with ongoing armed conflict in the Tigray region that has often targeted refugees, many being Eritreans, have left nearly 6 million people in need of humanitarian aid and more than 4 million internally displaced in Ethiopia.

From immediate policy changes to integrating new practices, there are opportunities for the US government, advocates, and community members to aid in rebuilding welcome.

Empowering those with lived experience in forced displacement to lead on conversations, research, and policy is essential. The 2022 ATCR saw the largest participation in its history of policy leaders, advocates, and government representatives with lived experience in forced displacement. Current and former refugees, asylees, and others from nearly every single continent showed what meaningful participation really means by leading panel discussions, sharing new research and data, voicing ongoing challenges, and sharing solutions to strengthen welcoming and protection policies worldwide.

Elected officials have an essential role to play in meeting the public’s will-to-welcome with policies to fund and rebuild, such as:

Despite the overwhelming global need, the Biden administration utilized only 20% of the US refugee program’s annual resettlement goal in fiscal year 2022 (which ended September 30th). The Biden administration must work with members of Congress to provide the necessary funding and support to rebuild domestic and international resettlement infrastructure, and address the significant backlog of refugees awaiting safety.

The AAA is an urgently-needed bill which would allow certain Afghan evacuees arriving with humanitarian parole, a temporary status, to have an opportunity to apply to become lawful permanent residents – the same legal status they would have received had they been admitted as refugees.

Terminate Title 42 Once and For All

In mid-November, Judge Emmet Sullivan ruled to end Title 42, however, at the request of the Biden administration, he issued a stay of enforcement until December 21. The Biden administration must honor Judge Sullivan’s ruling and allow the policy to end immediately. Furthermore, Members of Congress should reject the codification of Title 42 while supporting efforts to ensure the timely and fair processing of people seeking asylum, and facilitating greater access to fundamental legal services.

There are currently nearly a quarter million stateless people, or those at risk of statelessness across the United States, and we need our leaders to step up and make sure that these individuals are safe and protected. Congress should adopt the international definition of statelessness, provide protections from arbitrary immigration detention, and establish a path to naturalization for stateless people in the United States.

It is estimated that the number of individuals displaced by climate change could rise up to 1.2 billion by 2050. That is why we need to take proactive steps to ensure that we have the infrastructure and capacity needed to rise up to those challenges. Congress needs to appropriate robust funding to provide humanitarian aid to, and create resettlement pathways for, individuals impacted by climate displacement.

RCUSA’s membership continues to grow, bringing in new partners that deepen and expand our expertise. The only way to address the significant humanitarian needs of those dealing with forced displacement is to work together – utilizing and restoring humanitarian pathways in concert with one another to ensure the most accessible and appropriate protection for each individual.

Core to RCUSA’s mission is providing support and space for directly impacted community members to be at the front of policy and advocacy work, demonstrated by the recent launch of the United States Refugee Advisory Board by Refugee Congress, with core partners RCUSA and Georgetown University’s Institute for the Study of International Migration.

Support RCUSA’s vision and advocacy by donating this Giving Tuesday and sign up to learn more ways to advocate for forcibly displaced people throughout the year.